How many angels can dance on the head of a  pin? How many intelligent monkeys does it take to break reality? How many licks does it take to get to the center of a Tootsie Roll Tootsie Pop? The Billionth Monkey offers an answer to one of these questions. Belanger’s impromptu lecture on page 148 is entirely spot-on and factual, except that bit at the end about the billionth monkey. That’s completely fake.

While I won't repeat what is already in the book, here’s some back-story that Belanger doesn’t cover: The “hundredth monkey” story was first told by Lyall Watson (in 1975’s introduction to Lawrence Blair’s Rhythms of Vision and again in his own 1979 book, Lifetide). It was popularized by two other writers in 1981: Rupert Sheldrake’s A New Science of Life championed the tale as evidence of the existence of morphic (or morphogenetic) fields. Meanwhile, Ken Keyes Jr.’s The Hundredth Monkey used it as a parable about how to affect positive social change. The story soon achieved urban legend status—most relying on third- and fourth-hand accounts with distortions introduced in each retelling—and was also embraced by the New Age movement. The veracity of the story had since been questioned, including the metaphor-busting observation that the number of monkeys in the sweet-potato washing colony studied was only 58, far fewer than a hundred. 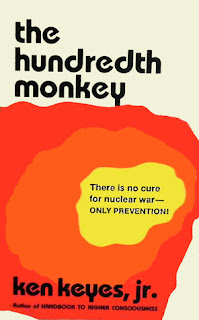 Lyall Watson’s story of one hundred macaque monkeys on the island Koshima was, to Rupert Sheldrake, proof of morphic fields and to Ken Keyes Jr., a metaphor for how to avoid nuclear war.

I meant no slight to Watson or Keyes by not mentioning them in The Billionth Monkey. The truth is that I learned about the hundredth monkey story from reading Sheldrake when his book first came out, so that is how I had Belanger, a fellow academic, tell it. Besides, his monologue is long enough without adding in the above details. That’s what this blog is for!

Posted by Richard Kaczynski at 6:44 AM