The mentions of room 237 (page 144) and Jack Daniels (page 147) are both references to The Shining (1980). While in Stephen King’s novel the “forbidden room” (or at least the one that Hallorann strongly recommended avoiding) was room 217, but in Kubrick’s film it is 237. The reason for this change is that the Timberline Lodge, which was used for exterior shots of the Overlook Hotel, requested this change out of concern that guests would refuse to stay in room 217; thus, a non-existent room number was chosen. As it turns out, 217 is the lodge’s most-requested room. 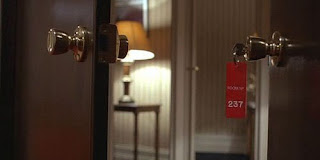 [However, see my post about page 127 where I show that 217 is the gematria value of “shining” in Hebrew.]

When Destiny Jones refers on page 144 to weird things that have happened to her while camping, I had no particular urban legend in mind. Campfires, however, are the traditional place for sharing spooky urban legends. Thus, a campfire is the opening scene for the entire Nickelodeon anthology series, Are You Afraid of the Dark? (1990–2000). It is also such a common trope that there best-of lists of horror movies about camping (e.g., here and here). So the possibilities are endless for what Destiny may have meant here. 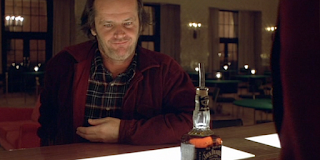 Moving on to page 147, in Kubrick’s film Jack Torrance (played by Jack Nicholson) is often found drinking Jack Daniels in the hotel bar. On a related note, see my post about page 129 where I insist that the gas station attendant Lloyd is not a (conscious) reference to the bartender in The Shining.

Posted by Richard Kaczynski at 6:46 AM