The character name “Bruiser” may sound as cliché as his evil-Popeye appearance, and initially I only intended it as a placeholder for a to-be-determined better name. But as I wrote this scene, I recalled the old Steven Wright joke:


“Some friends of mine got me a sweater for my birthday. I'd have preferred a moaner or a screamer…”

Once I made that connection, I was in love with the name. It’s one of my favorite jokes in the book. And—unbeknownst to me when I wrote this scene—over the course of the story Bruiser would turn out to have a host of other little problems.

Despite my describing him as an “evil Popeye,” his dialect is actually an homage to another comic book character: Ben Grimm, better known as the Thing from the Fantastic Four…my favorite comic book as a child. 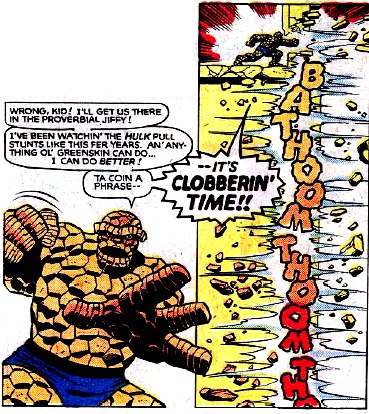 Posted by Richard Kaczynski at 8:29 AM