Muad’Dib is the name of the kangaroo mouse on the desert planet Arrakis in Frank Herbert’s epic Hugo and Nebula award-winning sci-fi classic, Dune (1965). The book’s hero, Paul Atreides, adopts the surname Muad’Dib as his chosen name of manhood while living incognito among the Fremen. Haunted by visions of his destiny, Paul ultimately concludes that the Sleeper must awaken: that is, he must drink the deadly Water of Life and, surviving the ordeal, become the Kwisatz Haderach, the super-powered Bene Gesserit of prophecy.

This may sound a bit confusing if you haven’t read the book, seen the movie, or watched the miniseries, but rest assured it’s a beloved staple of nerddom. It has even inspired Eli Tripoli’s religious tract-style comic, Me and the Muad’Dib. 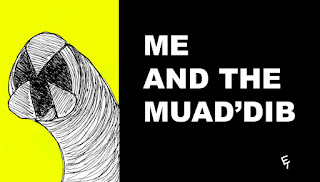 Read Eli Tripoli’s Me and the Muad’dib here.

Or if you want to add a little Dune to your holiday season, you can make this festive spice-filled Sandworm bread, recipe courtesy of Dangerous Minds:


Posted by Richard Kaczynski at 8:12 AM