Page 148: The Bishop and the Cheesemonger, et al.

The dialog on page 148 about obscure urban legends was an excuse for me to make up some silly—and completely false—urban legends. Unlike the popular ones that play an important role in The Billionth Monkey, I had a lot of fun inventing these obscure ones. At the time I wrote this, I was unaware that the Harvard Lampoon had published the humorous book Mediagate (Atlantic Monthly, 1988), which contained a fake publisher’s notice for the latest urban legend book by the great Jan Harold Brunvand. The Embarrassing Fart and More New Urban Legends purportedly included such doozies as the Senile President, the Adulterous Evangelist, and the Smelly Gym Sock. It would have been meta fun to reference some of these. But then again, the Harvard Lampoon legends seem to be culled from the headlines of 1987 rather than the obscure backwaters of urban lore …so it’s probably just was well that I didn’t reference the book. I like the scene just the way it turned out. 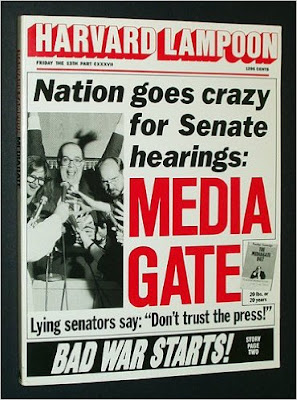 Harvard Lampoon's Mediagate (1988) includes a fake publisher's notice for The Embarrassing Fart and More New Urban Legends, which pokes fun at Jan Harold Brunvand’s many books on urban legends such as The Choking Doberman and Other Urban Legends (1984), The Mexican Pet: More "New" Urban Legends and Some Old Favorites (1986), Curses! Broiled Again! The Hottest Urban Legends Going (1989), and The Baby Train and Other Lusty Urban Legends (1993).

Posted by Richard Kaczynski at 9:15 AM