As with the super-hero posters on page 67, I changed the comic books in this scene at the last minute to Doctor Strange as a thank-you to Steve Englehart for writing a blurb for the book. I was an avid comic reader and collector from age four, and never lost my love for Doctor Strange: a skilled neurosurgeon who lost his fine motor skills in a car crash and subsequently turned to the mystic arts in search of a cure, only to find a higher and nobler calling as Master of the Mystic Arts and Sorcerer Supreme.

The character was created by artist Steve Ditko and green-lighted by editor and script writer Stan Lee. He debuted as a short feature in Strange Tales #110 (July 1963). The character subsequently introduced readers to Marvel Comics’ surreal and heady view of the cosmos: a perfect fit for the psychedelic sixties. The character became so popular that he commandeered Strange Tales (which was usually a double-feature with the continuing adventures of two characters such as the Human Torch or Nick Fury) and its title changed to Doctor Strange with issue #169 (June 1968). After a brief hiatus, the new stories written by Steve Englehart and Frank Brunner in Marvel Premiere led to a new Doctor Strange title in 1974. 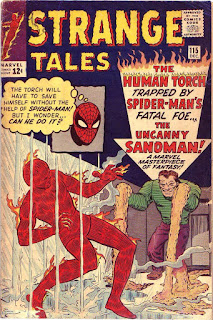 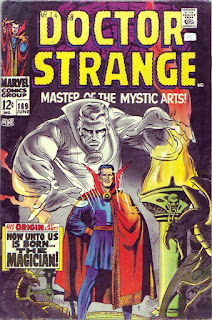 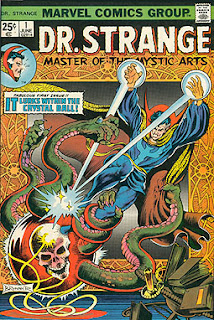 Here's an excuse for me to show off cover scans taken from books in my collection: Strange Tales 115 (1963) features the origin story of Doctor Strange. With issue #169 (1968), Strange Tales changed its name to Doctor Strange: Master of the Mystic Arts. With Steve Englehart and Frank Brunner at the helm, the doctor's appearance in Marvel Premiere led to the re-launch of the title Dr. Strange: Master of the Mystic Arts #1 (1974). All images © Marvel Comics.

The first five issues of this book served as the inspiration for Universal Pictures’ TV movie, Doctor Strange. Englehart went on to plot issues 6–18 on his own.  While the TV movie was pretty forgettable, he will enter the Marvel Cinematic Universe with a big-screen movie in November 2016. I can’t wait!

Posted by Richard Kaczynski at 9:13 AM