This post isn’t an Easter egg or #Reference of any sort. Instead, it concerns a detail of this scene in The Billionth Monkey that I thought deserved an explanatory post, because I’m unsure whether its significance is clear.

To recap the scene: Belanger’s smug interrogation turns the corner when he asks where Nicholas Young attended high school. At that moment, the formerly-cowed student realizes that his professor doesn’t, in fact, know what is going on. The repeat game of “Do you know who I am?” confirms, to Young’s relief,  that Belanger hasn’t figured out his secret.

Here’s what’s going on (the spoiler is in this paragraph): Belanger has three years worth of college transcripts for Young. What was Nicholas doing before that? The answer lies is in the prologue, which is set three years ago: he emerged from the Deep Water Lemuria. Prior to that, he wasn’t in high school at all. He was in Hell.

My editor didn’t make the connection, so in my final round of revisions I made some subtle changes that hopefully make it slightly clearer. I expect it would be obvious on a second reading at the very least. Fortunately, the story works just fine if the reader hasn’t pieced this together; but I’d be curious to know if anyone picked up on it. 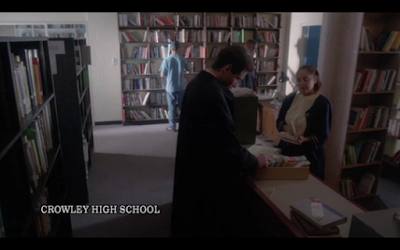 
Posted by Richard Kaczynski at 12:14 PM