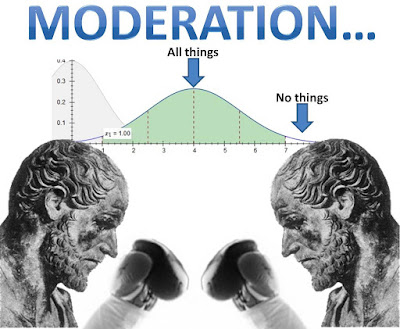 During the late 1980s I was good friends with an artistic couple in Detroit who were leaders in the local Neopagan community. They were the first ones in the area to organize large-scale public Sabbats and host high-profile lectures by people like Margo Adler (Drawing down the Moon) and Selena Fox (Circle Sanctuary). The husband, “Tree,” was writing a rock opera called Gaia. I’ll always remember him as a being of unbridled creativity: what was practical or possible was for other people to figure out, and he was charismatic enough to be surrounded by people eager to help him realize his ambitious visions. Ms. Tree—I won’t name her since I don’t know how public she is these days, but she was a talented artist—I recall saying that her alternative to “All things in moderation” is “Vary your excesses.”

Granted, Ms. Tree wasn’t the first to say this. “Everything in moderation, including moderation” is commonly attributed to Oscar Wilde; and while I can’t find a source for that particular quip, he indeed writes in his Epigrams (1909), “Moderation is a fatal thing. Nothing succeeds like excess” (p. 71). A couple of generations before Wilde, we find “The road of excess leads to the palace of wisdom” as one of the Proverbs of Hell in William Blake’s The Marriage of Heaven and Hell (1795). And so on.

And let us not forget Albus Weinstein’s Theory of Relativism.

As a statistician, I must agree that both “all things in moderation” and “vary your excesses” do in fact yield Aristotle’s Golden Mean. Consider three sets of numbers:

If you’re more of a visual thinker, picture it this way: Assume for the sake of argument that your data are in the shape of a normal distribution, or bell-shaped curve. This means that the higher the curve, the more observations you have in that area, and most observations are clustered around the middle and trail off smoothly from there to either side. The standard deviation defines how wide or narrow the bell is. The two figures below show two normal curves with the same mean/average, but differing in the amount of spread, or variation, around that mean. 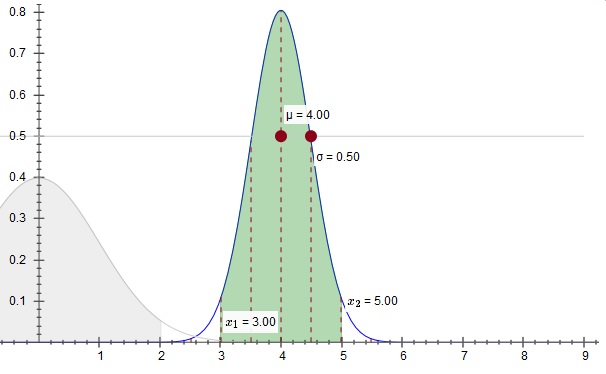 Whether you do all things in moderation (as with Set B) or vary your excesses (as with Set C), in the long run the mean is the same.

Posted by Richard Kaczynski at 9:10 AM