As The Billionth Monkey rockets toward its conclusion, the pop culture references come fast and furious. None on pages 212–220 qualify for a dedicated post, but here’s a breakdown of what you’ll encounter:

The Tweezer post on page 212 contains only one numerological Easter egg: 121 (from 121 likes) is the valuation of “play” transliterated as פלאי.

Next up on page 214 is the topic of Flemish self portraits, which refers to Nina Katchadourian’s series of cell-phone selfies which she calls “Lavatory Self-Portraits in the Flemish Style.” It was all the rage on social media when I was writing The Billionth Monkey, so it found a happy home in this scene.

The Fortean Times (page 217) is the glossy British magazine devoted to documenting the world of strange phenomena since 1991. Its namesake is American writer Charles Fort (1874–1932), whose books documented anomalous and unexplained phenomena such as rains of frogs, spontaneous human combustion, ball lightning, UFOs, and teleportation (a term coined by Fort). The magazine’s circulation is approximately 14,000 copies, or 1/28th of the London Times.

The line “It’s an alien!” (page 217) comes from a gag in BBC’s Doctor Who spin-off series Torchwood. In the episode “Something Borrowed,” Gwen (Eve Myles) remarks “Look. One bit me last night. Don’t ask me to explain. I can’t. I’m pregnant, Rhys isn’t the father, it’s an alien.” Then, pointing to her belly, she reiterates, “It’s an alien!”

“Mr. Undercover” on page 218 is a reference to the famous Tolkien parody, Bored of the Rings. In that book, Frodo’s alias at the Prancing Pony, “Mister Underhill,” becomes “Mister Undercover.” Rather than going with a straightforward Tolkien pun here, I decided to go more obscure!
“No sir, I’m a professor” on page 220 references a classic scene from The Blues Brothers (1980). When the brothers are asked if they’re the police, Elwood replies deadpan, “No ma’am, we’re musicians.”

Before seeing the premiere of the Blues Brothers back when I was a wee nerd, my buddy and I dressed up as Jake and Elwood, went to the mall, and had bogus photo IDs made. I am told that the clerk quit shortly thereafter, saying “Now I’ve seen everything.” On the way to the theater we stopped for White Castle. When the cashier asked, “Are you guys serious?” without skipping a beat I replied, “No, ma’am, we’re musicians.” 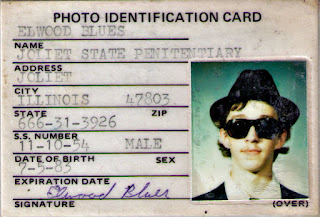 Posted by Richard Kaczynski at 8:55 AM