There are only two acceptable answers to the question, “What’s in the box?”

One is the oft-quoted scene from Dune (1984), in which the inquirer is Paul Atreides (Kyle MacLachhan):

The other is this scene from the classic finale of Seven or Se7en (1995): 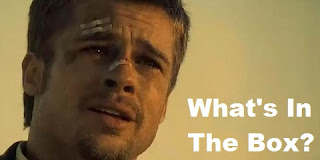 Don’t click play on the YouTube video below if you haven’t seen the movie, as it’s well worth seeing in its entirety. If you know the film, then press play and reread this scene in The Billionth Monkey for all the little details included in my little homage. (Belanger’s injuries and elastic plasters at this point in our story even match those of Brad Pitt.) It’s one of many reasons that my wife often teased that I was actually writing a screenplay.


OK, I suppose there is one other answer to our titular question… (excuse the subtitles, this is the only version I could find on YouTube):


Who knows? Perhaps The Billionth Monkey has added another acceptable answer to the list.

Trivia: “What’s in the box?” is also the title of a classic 1964 episode of The Twilight Zone.

Posted by Richard Kaczynski at 8:48 AM