On page 234 we get in haiku form the well-known Higgs boson joke captured by this meme: 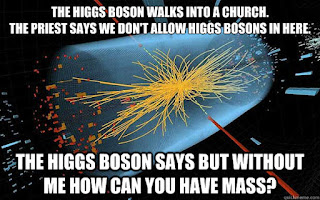 Turns out the particle has been the subject of an awful lot of jokes. There was plenty of talk about the Higgs boson in 2012 (approximately when The Billionth Monkey takes place), as on July 4 of that year CERN announced that it has detected a particle consistent with predictions of how the Higgs boson would behave.

In the Tweezer post on page 239, we find a representation of the numeral 1.239841930 x 10-6, a fundamental constant in physics which is derived from the Planck constant, h, and the speed of light, c. It is known as the inverse meter-electron volt relationship as expressed in Ev units. There is no particular significant to my use of this constant: it was simply one whose digits fit my needs for this Tweezer post. Plus SCIENCE! The number repeats in the post on page 240, where we also pick up the number 1028...which, much to my chagrin, was a typo. I meant to use 1024, the number of values in a 10-bit binary word or 210. But much like the Planck constant, it didn't signify anything other than my desire to sneak in an interesting number.

Posted by Richard Kaczynski at 10:08 AM