The line “Erg, I’m dyne!” on page 229 is a bad science joke dressed up in a Scottish accent. In physics, an erg is a unit of energy equal to 10-7 joules. A dyne is a unit of force equal to 10-5 Newtons. Together, “An erg is the amount of work done by a force of one dyne exerted for a distance of one centimeter.” This is quite possibly the biggest groaner in The Billionth Monkey...but in my defense I didn’t invent the joke; it’s pretty well known among science nerds. 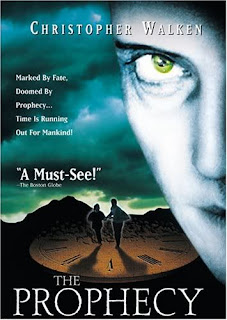 When Nicholas Young remarks “You monkeys really are incredibly stupid” (page 230), it isn’t just an obvious #MonkeyReference. He’s using the same disparaging term for humankind that we hear from Christopher Walken (the archangel Gabriel) and Viggo Mortensen (his unlikely ally) in the movie The Prophecy (1995). In fact, at home “monkeys” is how my wife and I imagine our cats refer to us when plotting to overthrow the household. Finally, Stoop!d Monkey is the production company of Seth Green and Matthew Senreich, which is involved in the Adult Swim program Robot Chicken...which, like The Billionth Monkey, is also a cavaldade of pop culture references.

Posted by Richard Kaczynski at 7:37 AM