On the topic of the mysterious “sin against the Holy Spirit,” I—as the author of Perdurabo: The Life of Aleister Crowley (2010)—must quote Crowley’s account of how he as a bitter teen decided to rebel against religion after God took away his idolized lay-minister father through tongue cancer. This rebellion consisted of young Alec abandoning his former ambition to be the best-ever Biblical scholar, and naively determining to become the best-ever Biblical sinner.

As Crowley recalled in his Confessions (1929):

I was anxious to distinguish myself by committing sin. Here again my attitude was extraordinarily subtle. It never occurred to me to steal or in any other way to infringe the decalogue. Such conduct would have been petty and contemptible. I wanted a supreme spiritual sin; and I had not the smallest idea how to set about it. There was a good deal of morbid curiosity among the saints about “the sin against the Holy Ghost” which “could never be forgiven.” Nobody knew what it was. It was even considered rather blasphemous to offer any very positive conjecture on the point. The idea seems to have been that it was something like an ill-natured practical joke on the part of Jesus. This mysterious offence which could never be forgiven might be inadvertently committed by the greatest saint alive, with the result that he would be bowled out at the very gate of glory. Here was another impossibility to catch my youthful fancy; I must find out what that sin was and do it very thoroughly. (p. 67)

There’s something very poignant about a naive and shattered boy wanting to strike back at God for killing his dad, only to run aground on the reefs of Christian hamartiology.

Crowley would go on to conclude that spiritual truths were the only things in life that really mattered or endured, and he would devote himself to systematically exploring them...albeit in ways that many considered unconventional and even shocking. You can read all about it in Perdurabo. 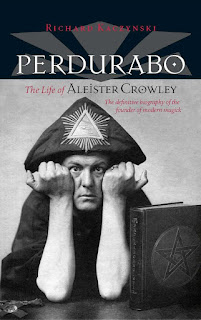 Posted by Richard Kaczynski at 11:25 AM