Niels Belanger’s mental narrative about Voodoo priestess Marie Laveau (ca. 1794–1881) is an accurate if succinct summary of the woman and her legend, so there’s no need to repeat it here. For all the gory, scholarly details, see:
For instant gratification, there's always Wikipedia.
For damage done to her tomb by the "triple-X" contemporary legend, and attempts to discourage this practice and preserve the tomb, see this article. Owing to vandalism, access to her resting place at St. Louis No. 1 was this year sadly restricted to those with an official escort.

For the ghost of Marie Laveau slapping a pharmacy store customer, see Robert Tallant, Voodoo in New Orleans (New York: Macmillan, 1946; rpt. Gretna, LA: Pelican, 1990), 130–1, or the paraphrase online at Secrets of the Voodoo Tomb (scroll down to “A Haunting Tale”).

Because records from her era are sketchy, there is some debate about the location of Laveau’s tomb, and which Laveau (her or her daughter Marie II, 1827–ca. 1895) is buried where. However, the tomb in St. Louis No. 1 is most commonly accepted as he resting place, and has an official plaque to mark it.

For those of you unfamiliar with St. Louis No. 1 cemetery, here are photos of the approach to the cemetery taken during a research visit there: 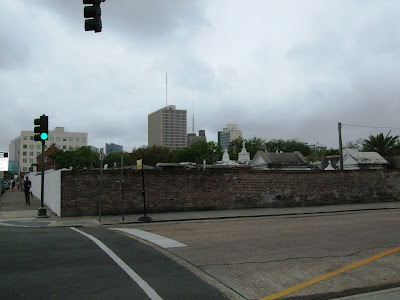 Posted by Richard Kaczynski at 7:29 AM