0. The Story Behind the Cover

This post inaugurates the promised walk-through of The Billionth Monkey, in which I’ll talk about jokes, references, inspirations, and other trivia about the novel. And what better place to start than the front cover? 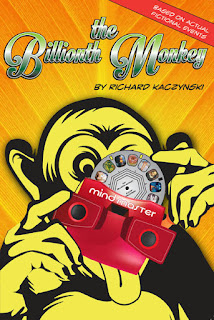 This was hands-down the hardest part about putting together The Billionth Monkey, and I’m thrilled with how it turned out. All the credit for that goes to Aaron Tatum of Digital Pear. I had worked with him previously on Perdurabo Outtakes, Panic in Detroit, and Forgotten Templars, so when I needed a book cover he was naturally the first person I thought of. What he came up with was nothing short of a miracle considering what little I gave him to work with.

Above: Aaron's cover designs for some of my previous books.

A book cover has to do many things well at the same time. It must be eye-catching. It needs to convey something of what the book is about, in action or mood, without major spoilers. It can't be too busy (many a beginner's fatal error). And it has to look good small, when seen across the bookstore or as a website thumbnail. After months and months of agonizing over this, I couldn’t think of anything that excited me.

My one lukewarm idea requires a detour into British neo-prog rock band Marillion, particularly their early album covers. I always loved how Mark Wilkinson’s gatefold artwork for the band created eye-catching images, but when you looked closer you noticed references to the individual song lyrics. Much like the musical genre it accompanied, repeated exposure was rewarded by more nuances revealing themselves. Take, for example, his cover for Marillion’s first album, Script for a Jester’s Tear (1983): 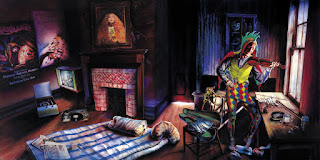 The artwork for Marillion's Script for a Jester's Tear (1983),
© Mark Wilkinson, used by permission.
The original image is from Mark's website, the-masque.com.

Not only do we see the titular jester, but on closer inspection we also spot: the tv screen referencing the lyrics to "Punch and Judy”; Ophelia's portrait over the fireplace recalling “Chelsea Monday”; and the chameleon alluding to “She Chameleon” (a cut saved for the second album). For Mark’s account of creating this cover, see https://www.teamrock.com/features/2015-02-18/cover-story-marillion-script-for-a-jester-s-tear

Given all the pop culture references in The Billionth Monkey, I thought a lighthearted take on Mark's approach would be fun. It could allude to scenes in the book without spoilers, and be something to which readers could return after they finished the book and go, “Oh, I get it!” Easter eggs on the cover also tied into the various Internet Easter eggs that go with the book (if you’ve discovered those yet).

So back to my lousy cover idea, which was to show the “filmstrip” view screen of a smartphone (a device that appears throughout the story). The phone would be in a monkey’s hand, with its other free index finger about to tap one of the thumbnails/icons, all of which reference events in the book. However, my rudimentary mock-up looked more like a cell phone advert than a book cover. I could imagine the caption: Simple enough that even a monkey can use it! So I trashed that concept.

When I invited Aaron to let me know if he had any suggestions—because I had nothing—he sent a first draft cover which was basically what we used in the end. He remarked, “I don’t know where the Mind-Master came from. Did I get that from you?” I told him it did not come from be, but it was freaking brilliant. And that’s why I love working with Aaron: his first instincts are so inspired. The Mind-Master concept allowed me to have a lighthearted and eye-catching image, but it included a view disc on which I could stash my Easter eggs. Also—while I don’t think this was intentional on Aaron’s part—the the monkey sticking its tongue out reminded me of the “Don’t Panic” symbol from Douglas Adams’ Hitchhiker’s Guide, a nice accidental homage.

Which brings us to the view disc itself. I’ll do this without spoilers but what we have are:

One image that I wanted to use, but for which I couldn’t get permission, was the cover to Marvel Comics #1 (October 1939). It figures into The Billionth Monkey in both chapter 22 and (by allusion, back to) the prologue. As a collector and unabashed Marvel fan-boy since age four, this comic was always the Holy Grail to me. You can read all about the issue, and check out the cover, here. When I asked about using the image, Marvel explained very kindly and promptly that they only allow their covers to be reproduced on the covers of books published by them. Had I wanted to use it inside the book, we could have worked something out; but putting it on the cover was a no-go. Fair enough, and it’s a position that I completely understand.

Even without that image rounding out my fan-boy wish-list, the cover turned out being everything and more than I could have hoped for.

Posted by Richard Kaczynski at 9:25 AM