In December 2014 I spent a night at the Timberline Lodge in order to take the photo for page 142 of The Billionth Monkey. The next day, as I had lunch in the Ram’s Head Bar before getting on the road, I noted the skiers and snowboarders returning from the slopes: What were they wearing? What were they doing? What were they talking about?

One thing I noticed was a lot of generational slang. The other was a lot of skiing lingo, which was very helpful. All these details informed my writing of this scene.

A “monkey trail” is snowboarder slang for a small trail—often through the woods—of the main trail. This term allowed me to slip in another #MonkeyReference. For more snowboarding terminology, see http://www.abc-of-snowboarding.com/snowboarddictionary.asp. 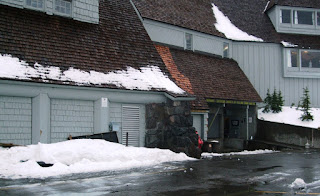 I wandered around back looking for a Snow Cat, but didn't find one.
This was worrisome. What had Jack done with it?

Posted by Richard Kaczynski at 7:27 AM