I suppose I ought to fess up right now that in this scene from The Billionth Monkey I imagined the bartender looking kind of like Samuel L. Jackson’s character Stephen from Django Unchained (2012). Not that the bartender is (to use Jackson’s description of Stephen) “the most despised Negro in cinematic history.”  I was just picturing a distinguished-looking older man who dressed better than the establishment he was tending.

Given this, I also thought it would be hilarious to see the bartender’s proper demeanor crumble when he reached for a shotgun and reverted into Snakes on a Plane-vintage Samuel L. Jackson. Which is exactly why he makes the remark about the motherfucking snipers. I just love the fact that Jackson insisted that the 2006 movie keep its original working title, Snakes on a Plane, because it was the reason he agreed to be in the movie in the first place. 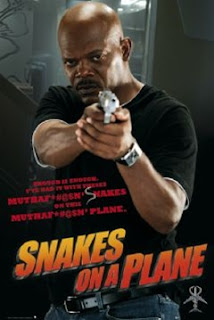 Posted by Richard Kaczynski at 9:38 AM