Page 102: You don’t speak like anyone I’ve ever known

I love language. Language and all the funny things that can be done with it. You can completely change the meaning of a sentence by replacing a word with its homonym. Or another word that rhymes. My brain constantly makes spoonerisms with common phrases. From Bugs Bunny’s “Pronoun trouble” to George Carlin’s “You can pick your finger, but don’t finger your prick,” I am endlessly entertained by tinkering with language. That comes with being a writer.

One of my favorite modern language-tinkerers is Joss Whedon, who I already name-dropped back on page 30 of The Billionth Monkey. He created a style of witty banter that is much-emulated these days, but it all started with Buffy the Vampire Slayer. Not being a fan of the movie, I tuned into the TV show’s premiere prepared to hate it. Then I heard star Sarah Michelle Gellar use words like “inscrutable” and “platitudes.” There was more to this show than I expected, and I invariably became a huge fan.

What intrigued me most was how the characters didn’t just use common English phrases, but played with them and created new and original turns of phrase. Buffy actually created slang that crept into modern vernacular, rather than vice versa.

In retrospect, it’s pretty unsurprising: A large part of culture and language involves pop culture references. Conversations with my friends invariably involve quoting TV shows, movies, song lyrics, internet memes, etc. Like sharing an inside joke, it bonds us together by acknowledging shared cultural referents. So yeah…not only will people quote a popular show like Buffy, but they will also start using its invented slang. As someone who loves to tinker with language, that is the coolest thing imaginable.

I wanted Destiny Jones to embody that linguistic playfulness. I’m pretty obvious about that intention with “English 2.0” and all. So before writing The Billionth Monkey, I literally spent several weeks dreaming up unique phrases with which to pepper her vocabulary. And I read through a dictionary of idioms in search of inspiration for new catchphrases. I eventually came up with pages of them, only about half of which made it into The Billionth Monkey. We never get to hear Destiny Jones say “All that jitters is not nervous,” “like comparing assholes and orangutans,” “deny before you try,” or “regurgitate one’s pride.” It would be a dream come true to see even one of her phrases make it into modern vernacular. My favorite contender for that is “I don’t have a cock in this fight” (p. 123). 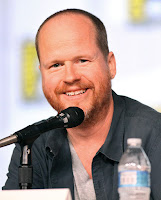 Two other masters of dialogue also deserve a shout-out here: Quentin Tarantino and Kevin Smith. Whether it’s Kill Bill or Dogma (or any of their other fantastic films), both of them sure know how to write captivating conversations that leave you hanging on every word. It may not be the first thing that folks remember about their work, but I sure do. For all of the action scenes in Kill Bill I, the best thing about Kill Bill II were the conversations between characters. And who but Kevin Smith would open a movie with an existential conversation about religion and sin, and manage to make it hilarious?

Whedon, Tarantino, and Smith: these were my inspiration for The Billionth Monkey’s introductory conversation in between Destiny Jones and Niels Belanger.

Posted by Richard Kaczynski at 11:01 AM