I'm really excited to receive Greg LaRocque's original art pages for the Hamlet Special Edition mini-comic that appears in The Billionth Monkey (for scale, the art appears with the back cover of the 6x9 hardcover flip-book, showing the cover painting by Robert Randle).
Greg has drawn literally hundreds of bronze-age comics, including such titles as Spider-Man, The Avengers, Legion of Super-Heroes, Power Man, Iron Fist, and a five-year run on The Flash (in which he redesigned the Flash's costume to its iconic modern form).
As a comic book geek since age four, I'm honored to have had the opportunity to work with a legendary artist like Greg. And as someone with a modest collection of original art pages, I'm thrilled beyond words to have the original art to my very own comic. It's so cool to examine details on the original boards before the addition of coloring and lettering. 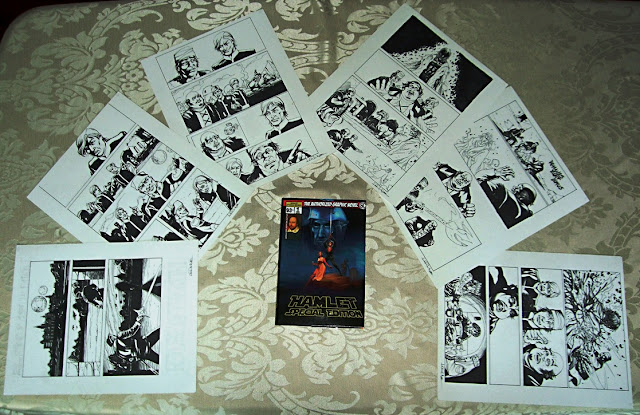 Posted by Richard Kaczynski at 7:42 AM